JR Pomerantz was raised in New Jersey, moved sixteen times, from Albuquerque to Kabul, and now resides in Silver Spring, Maryland. Hobbies include using all the forms of transportation in the world, flamenco guitar, and knitting. She hopes to one day own and operate a coffee farm.

She says: “This writing career is about one thing, and one thing only: writing epic adventure stories for the 21st century, earning 20 million dollars in revenue, using it to get shot into space, and writing a story about that. I guess that’s four things.” 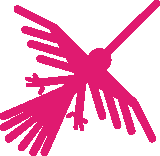 Q. What was your most memorable festival experience?

A. Holi, in Rishikesh, India. A few days earlier, one of my eyes started itching. That day, down by the Ganges, it swelled shut. I walked a few kilometers to get to the hospital.

Closed due to holiday.

Then I walked a few kilometers in the other direction. This hospital was open. But no eye doctor, they said. In retrospect, we had a communication barrier. Then my other eye swelled shut too, in sympathy.

I didn’t know eyes do this, but they can. I soon discovered there was an eye doctor there, because I walked around the hospital until I squintily came upon an eye chart with a doctor next to it. He refused to see me (that was an eye doctor pun; I’m a writer) until I paid. So, I went back to reception and paid.

It cost 5 rupees, which in those days [2004] was 1/8 of a dollar, I believe. This was a good price for restored vision, which he returned to me by taking some gauze, flipping my eyelid up, and removing a tiny spherical black rock from my eye.

When I got outside, Holi was in full swing, and everybody was throwing the colors around. It was the best celebration I’ve ever attended. I don’t completely understand what Holi commemorates, but I was celebrating my eye.

Later on in life I dated a blind computer programmer who said losing your sight isn’t that big a deal, but it was to me.

I know this question was asking about Bonnaroo or Fyre Festival. But this story is better.

Got a Q for the Q&A?
Email: jr@jrpomerantz.com